The Ringling: The Story Behind the King of the Circus

As you enter the home, you’re transported back to the 1920’s as a guest of John and Mabel Ringling. You imagine the opulent mansion filled with politicians, businessmen and movie stars dancing in the vaulted court with Asian Teak floors, and sipping cocktails on the all marble terrace overlooking Sarasota Bay.  An orchestra performed from the yacht and the music continued until dawn. It was said that the music could be heard across the Bay to the Keys, which Ringling also owned.

John Ringling stood 6’4 and was known to be temperamental and liked to be in charge.   He was a businessman who preferred tailored suits, fine cigars and European art.  You may know him as “The King of The Circus” but did you know that he started with the circus as a clown and that at one point he owned 25 percent of Sarasota Florida’s total area?

Born on May 31st, 1866 in McGregor Iowa to a German Immigrant, he was the 2nd youngest in a family of 7 boys and one girl. In 1905 John married Mabel Burton and 11 years later, John and Mable purchased 20 acres of waterfront property in Sarasota. By the 1920’s he owned and developed the Sarasota Keys. By 1926 the Ca’D’Zan, Venetian for the House of John was completed.

The Ringling Circus, (Ringling bought the Barnum and Bailey circus for $400,000), traveled across the country, employed nearly 800 people and was coined “The Greatest Show on Earth.”

It was said that the Ca’D’Zan was “John’s love letter to Mabel.” Mabel oversaw all the details of construction from the glaze on the tile to the color of the walls. Green was her favorite color. She was given a budget of $250,000 to design their home.  The Ca’D’Zan was completed in 1926 for a cost of $ 1.5 million.  Budgets were not Mabel’s thing.  The mansion is smaller than and less well known than the Biltmore Estate in Ashville NC, but created from the same desire to boast one of our country’s largest private homes. 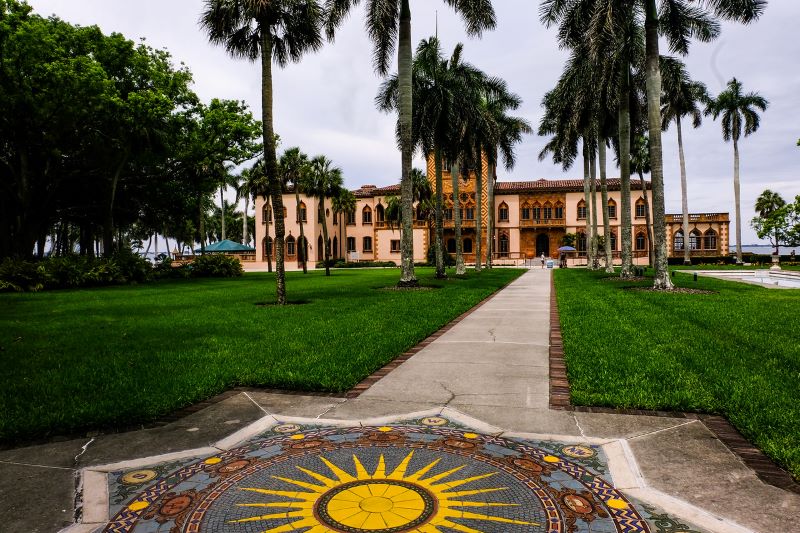 The Venetian inspired mansion is 22,000 square feet with 32 rooms and 15 bathrooms. John and Mabel traveled throughout Europe frequently acquiring artwork which adorned the walls.
The Ca’D’Zan was inspired in large part to The Doge’s Palace, one of the main landmarks in Venice Italy.
The mansion is filled with furnishing acquired during the Ringling’s travels. One of these is a crystal chandelier which was purchased from The Waldorf Astoria Hotel in New York prior to its being demolished to make room for the Empire State Building.
The interior of the home was designed to accommodate a $50,000 Aeolian organ with 2,289 pipes installed behind curtains on the second floor.

Even John’s bedroom set, (Yes, John and Mabel had separate bedrooms), was extravagant. The mahogany and bronze Napoleon Style set was purchased for $35,000

During your visit to the Ringling be sure to allow time to stroll through the Gardens. The sprawling 66 acres of grounds and gardens include stunning views of Sarasota Bay.

Mabel’s Italian inspired Rose Garden was originally completed in 1913.  The 27,000-square foot rose garden has a circular design resembling a wagon wheel.  The garden is filled with statues of courting couples. None of the original roses are there today but the Garden contains the same varieties that Mabel planted. 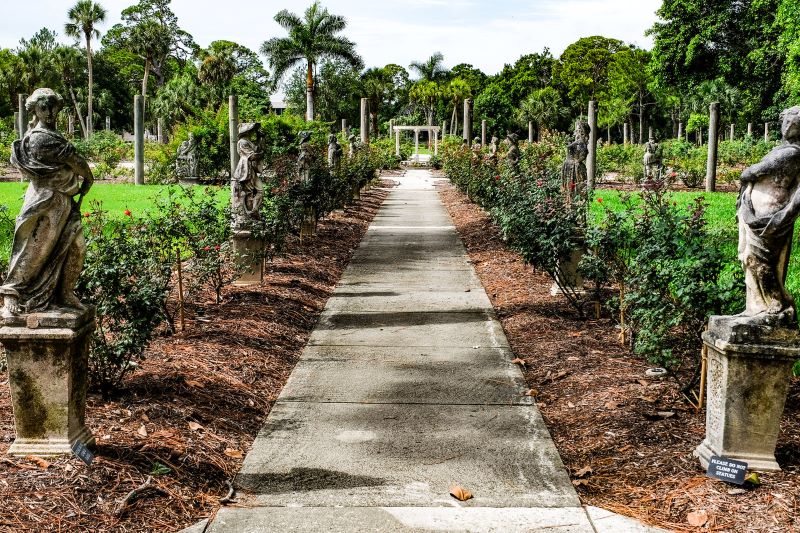 Mabel’s Secret Garden, located near Ca’D’Zan, was created with plants given to her by her friends. It was said that she loved taking them on tours of the garden when they visited. The Secret Garden is the burial site for John and Mabel. 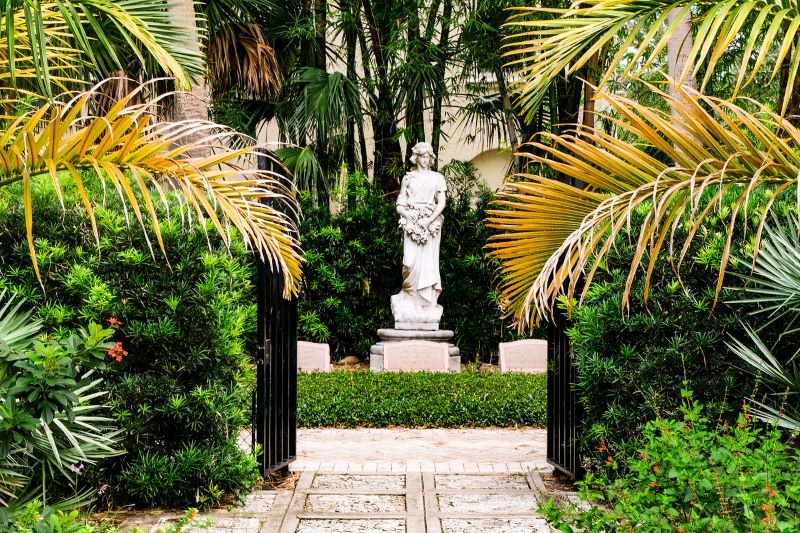 Sprinkled throughout the Gardens are 14 Banyan trees with their roots extending down and spreading to create a canopy: a respite from the heat. The Ringling’s Banyan trees are the largest collection in Florida.

The smaller Circus Museum was closed for renovations during our visit but will reopen in the fall.  The Tibbals Learning Center celebrates the people and history of the circus from its earliest roots through contemporary times. 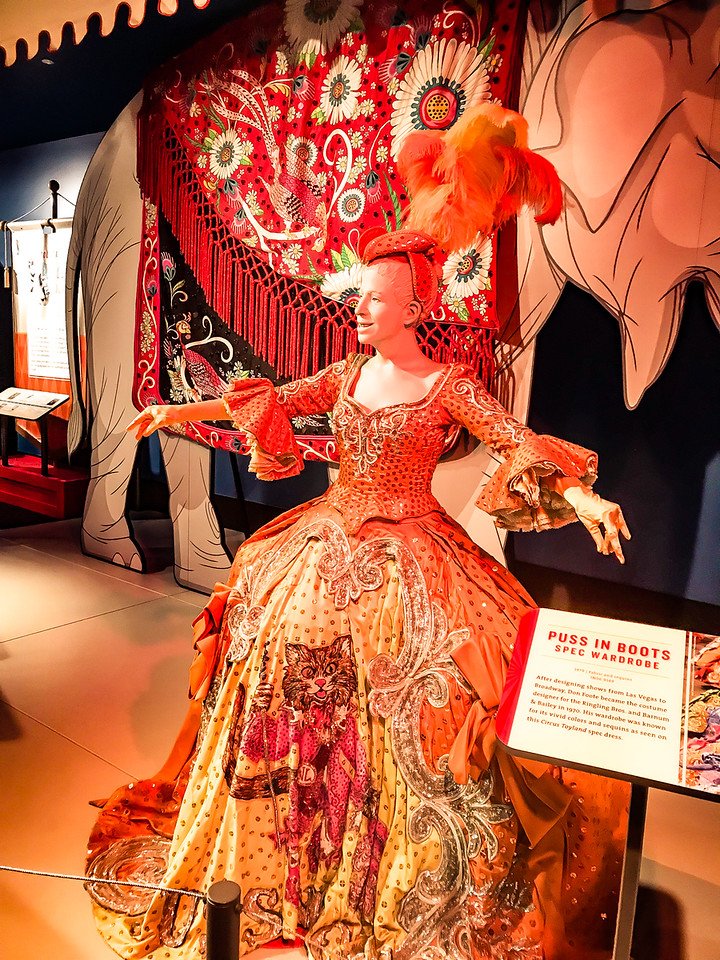 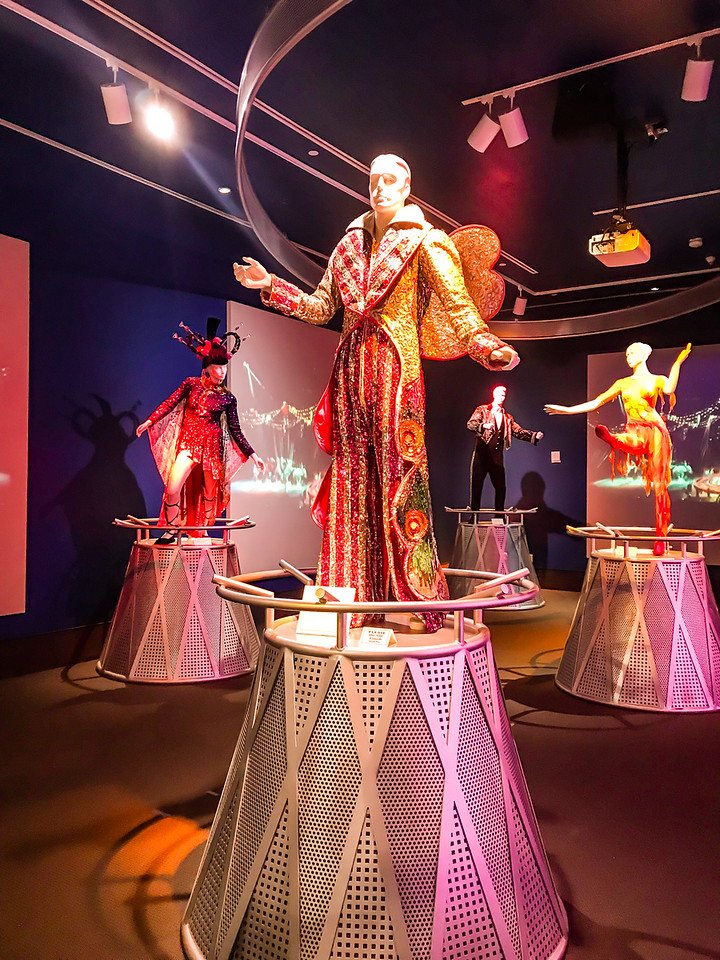 In addition to the circus timeline, replicated circus acts and characters, the Learning Center houses a 38,000 square foot circus miniature built painstakingly by hand.  Howard Tibbals, a Ringling Museum benefactor and circus historian, created this extraordinary “magical world more than 50 years in the making”.  Tibbals saw the circus for the first time at 3 years old. His fascination and love of the circus grew, and he began creating the miniatures in 1956 after being given the building tools as a birthday present.  The miniature depicts life around the fictional Howard Brothers Circus.  It includes 42,000 circus related miniatures and 8 tents during the period from 1919-1938, the days of the Big Top. During these years wagon trains transported the circus, including elephants, hippos and huge tents from town to town setting up in a new town each day. The show was a huge affair and often the town’s largest event of the year. 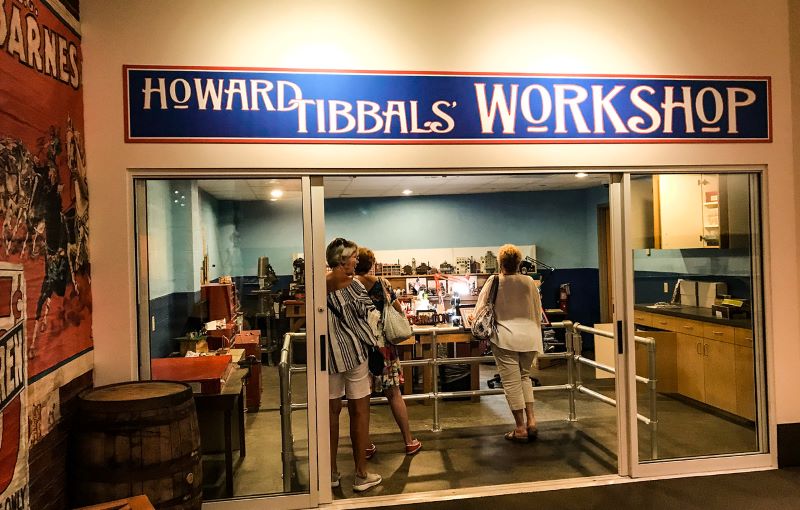 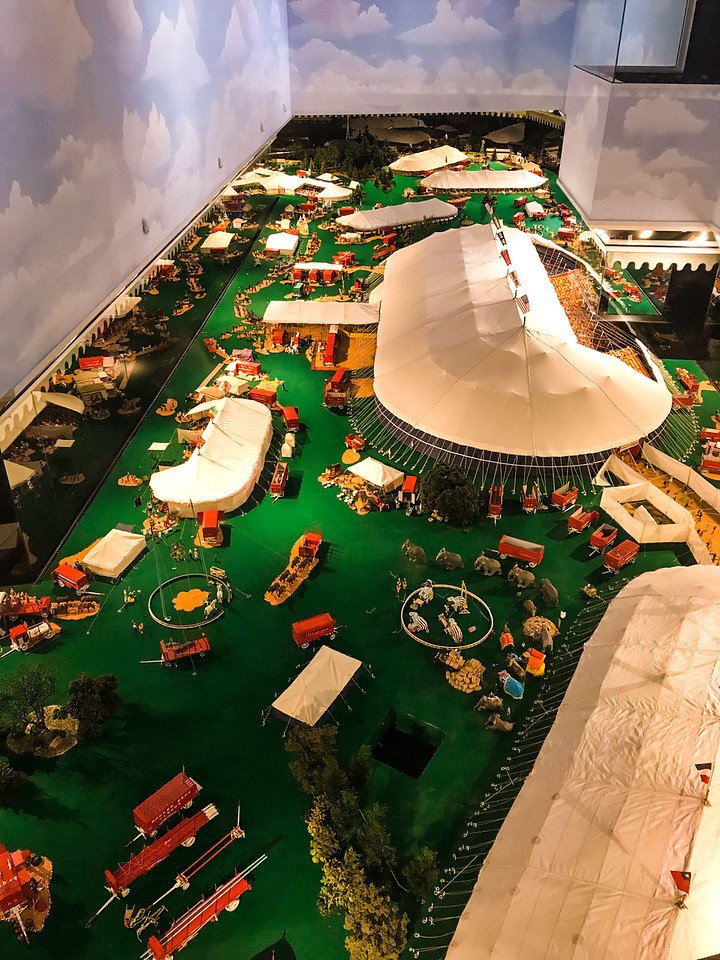 In 1925 John Ringling built the Art Museum as a memorial to Mabel and to leave a legacy. The museum includes 21 galleries primarily focused on European art and ancient and medieval objects.

The museum is home to a collection of masterpieces from artists including Rubens, Titian and Gainsborough, just to name a few. 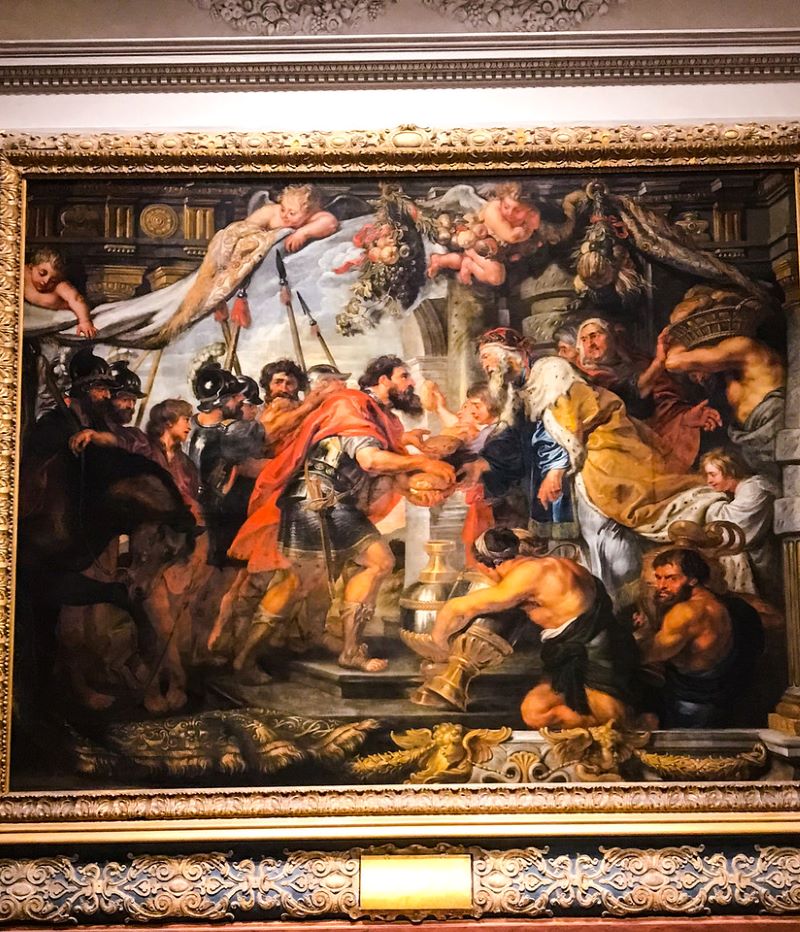 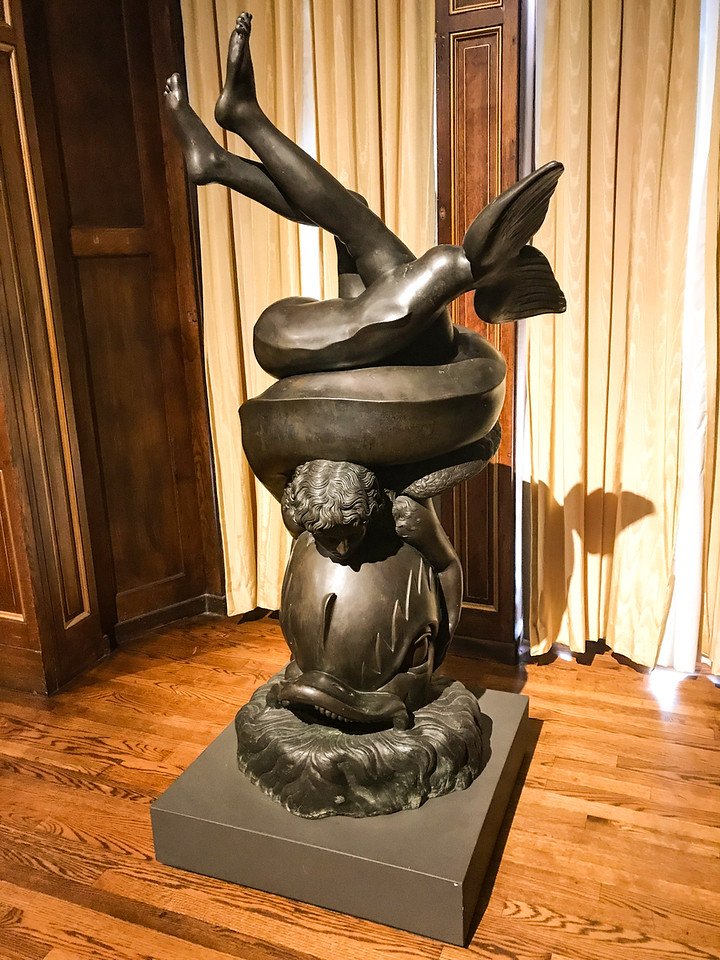 The galleries surround a courtyard which is filled with copies of famous sculptures and beautifully manicured grounds. 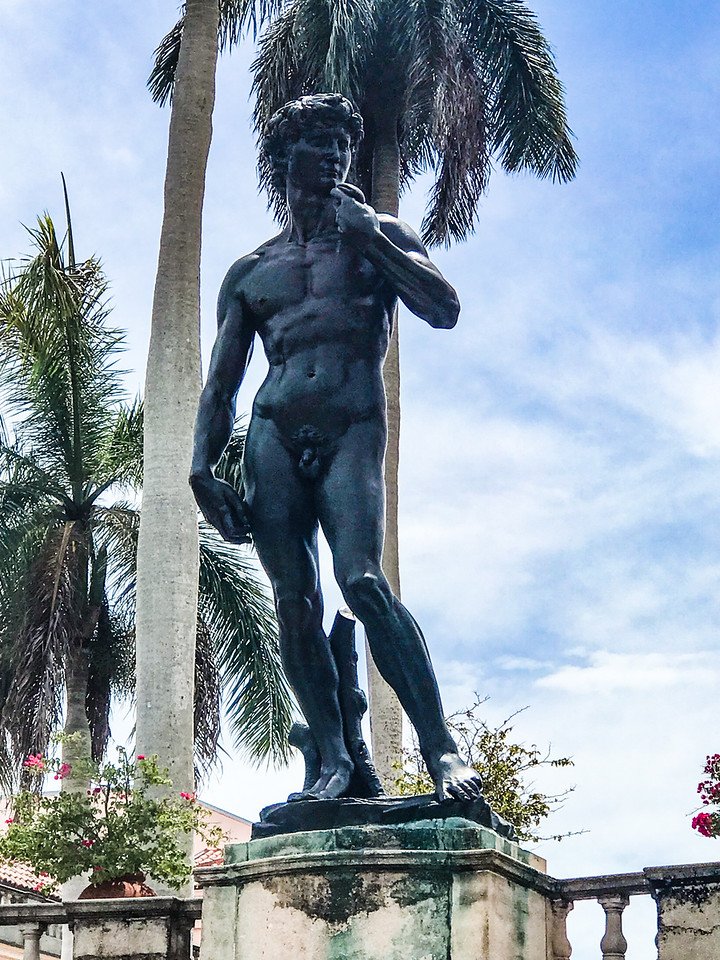 The End of The Story

The story does not have a happy ending for John and Mabel Ringling.  Mabel Ringling died on June 8, 1929, at the age of 55 due to Addison’s Disease.  This was only 3 years after completion of the Ca’D’Zan.  Shortly after Mabel’s death John lost his empire due to the Great Depression.  He was able to retain his home and his extensive art collection.  It was said that he could have recovered his fortune by selling his art but refused.  John died on December 2, 1936 with $311 in his account.

Following John’s death, the Ca’D’Zan remained closed for many years. It fell into disrepair due to neglect and lack of funds.

In 1996, funds from the government, private individuals and foundations began a restoration project to restore the home to its original condition. The restoration was completed in 2002 at a cost of $15 million. Today it stands as an architectural treasure full of beauty and history.

A final interesting fact… In 2002, The state of Florida placed the Ringling under the stewardship of Florida State University. It is home to the Sarasota Ballet, Asolo Repertory Theatre and FSU/Asolo Conservatory for Actor Training. It has become one of the largest college arts centers in the country.

If you visit the Ringling, you should plan an entire day. There is a lot to see.  The Ringling is open daily from 10:00 a.m. until 5:00 p.m. Admission to the Museum of Art, Circus Museum and Tibbals Learning center is $25 for adults, $23 for seniors $5 for children 6-17. Children under 5 are free.  Admission to the Ca’D’Zan is separate. The cost for a self-guided tour of the first floor is $10.  I recommend a docent-led tour of the first and 2nd floor to really understand the history and personality of the home. Docent-led tours are $20 and last approximately 40 minutes.

Be sure to allow time to wander through the Gardens. A complimentary tram service is available and runs continually throughout the estate. 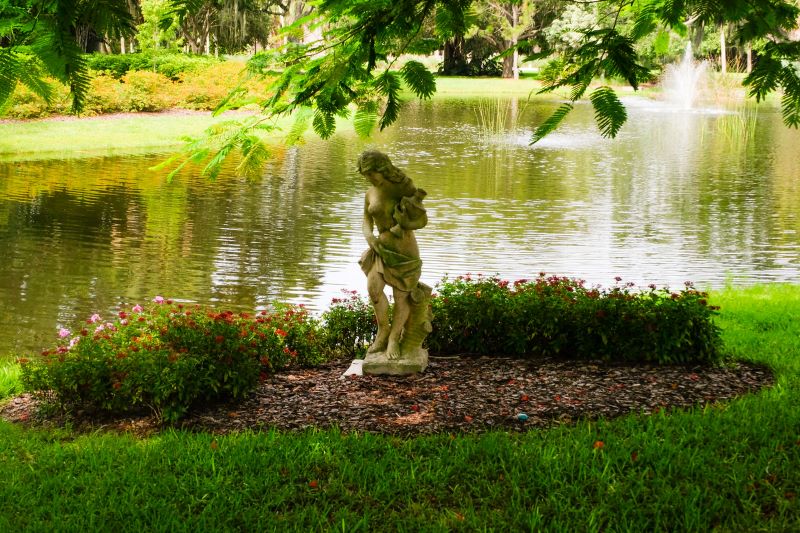 There is so much more to Florida than Disney World and beaches. If you enjoy Florida’s History, art and culture; or just want to learn more about the Circus (we’ve all seen The Greatest Showman) add The Ringling to your list of interesting places to visit. 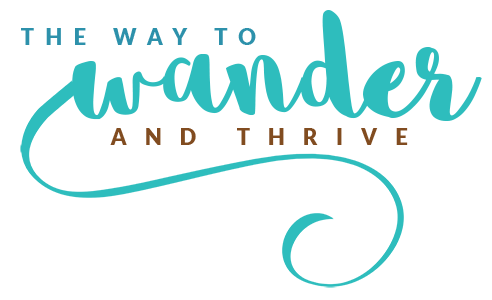 I’m a freelance writer and photographer living in SW Florida. I have a love of travel and photography. Living in Florida, my backyard is a travel destination with crystal clear water, beautiful beaches, quaint towns, and amazing wildlife. Wander with me…